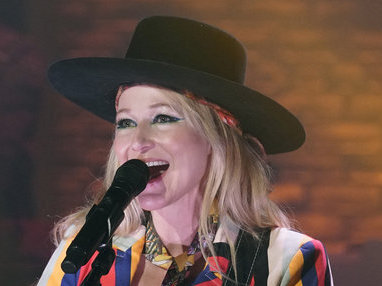 Jewel performed with color last night on “Late Night With Seth Meyers” as her pantsuit stood out during the performance of her new song “Alibis.”

The Grammy-nominated singer’s suit doubled down on a variety of colors, including stripes of yellow, dark blue, teal and red. The two-piece set stood out for its brightness as well as synchronicity.

Under the suit, she wore a red satin bustier, which amped up the outfit’s vibrancy. The blazer and pants were tailored perfectly as the legs had a slight flare.

Women’s suits have an interesting history and have been embraced for utility and statement-making. The style emerged in the early 1900s during the Suffragette Movement, but didn’t hit peak popularity until the 1980s as more women entered the workforce. And Jewel’s silhouette and color-blocking was an apt choice for her line of work onstage.

The hitmaker also wore another scarf around her neck in the color gold, adding another artistic layer. Her makeup was striking as she did a bold cat-eye with a white and blue under-layer.

From the 1920s to Today: High Heels Through the Decades

TOMS discusses its approach to mental health awareness and female empowerment through impact initiatives in the footwear segment.
Learn More

In partnership with TOMS

stood out during the performance of her new song Alibis

Only $24.99 stood out during the performance of her new song Alibis!